I went through a phase a couple weeks ago where I became obsessed with knowing everything I could about permutation / Monte Carlo / bootstrapping-based statistical methods. But besides the excellent Tidy bootstrapping with dplyr+broom I couldn’t find many resources on doing randomization-based tests in keeping with the tidy data philosophy and more modern tools for R (e.g. purrr and modelr).

At the end of the week I ended up with a lengthy R Markdown document which I figured I share in piecemeal over the coming weeks.

why? And some definitions

bootstrapping: sampling with replacement from your data. Mostly useful for getting a confidence interval or seeing the variation inherent some test statistic of interest.

Monte-Carlo sampling: Similar to permutation testing, but uses random or pseudo-random numbers to randomly permute the dataset to generate a null distribution and compare the distribution to the observed test statistic.

Comparing some quantitative variable of interest in two groups is a common problem. For instance, many websites perform A/B testing where two different forms of a website are presented to users, data are collected, and the company then wants to know whether some user behavior differed between the two forms of the website.

If we’re uncomfortable with that last assumption, it usually makes sense to use a randomization or Monte-Carlo-based approach to testing. The approach works like this:

(1) Destroy any relationship between an observation and which of the two groups it belongs to. You can think of this as taking the labels that tell you whether a given datum belongs to group 1 or group 2, shuffling them, then randomly assigning the labels to the data points.

(2) Using this new dataset with shuffled labels, compute some statistic of interest, like the difference means between the two groups.

Because we’re randomly assigning the labels to the data points, it’s equally likely that each data point gets a given label; this means that this particular method assumes equal variance of the two groups. There’s a way around this assumption according to Good’s Resampling Methods: A practical guide to data analysis which I’ll cover in another post.

Below I show how to carry this out using a tidy data approach in R.

I’ll use the mtcars dataset and test whether manual and automatic cars differ in their weights:

We can first run a traditional two-sample t-test:

Next we can do the randomization-based approach outlined above:

Each row represents a different permutation. Using broom::glance allowed us to easily pull out a bunch of useful information from the t-test, and unnesting the tidy column added these useful statistics as columns to the data frame.

The estimate column here is the most useful to us: it represents the difference in the means between each group. If we’ve effectively destroyed any correlation between transmission type and weight, the average difference between the two groups should be zero. We can verify this is the case. I’ll also find the observed difference between the groups in the non-randomized dataset and plot that as a red line: 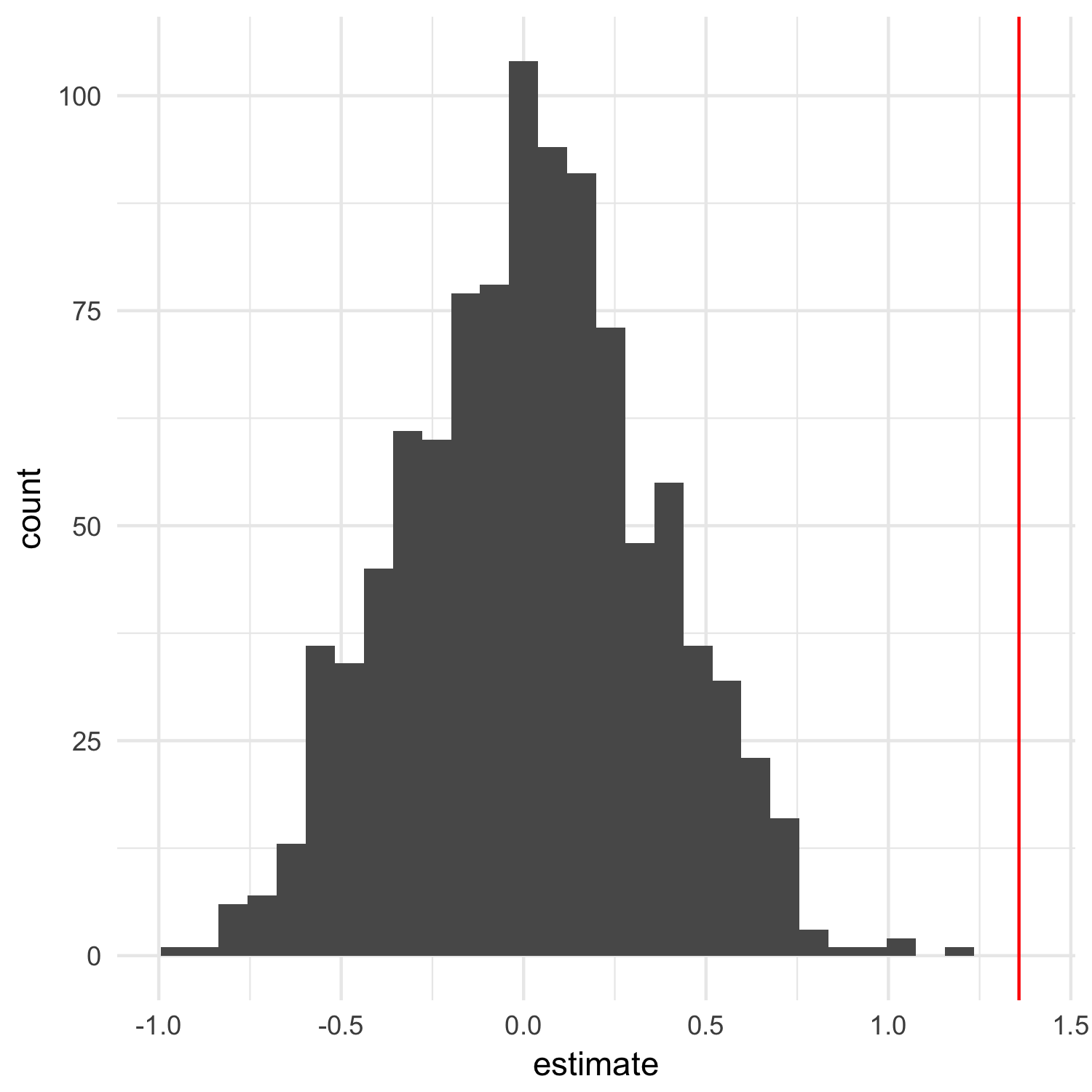 We can also calculate the average difference and show that it’s about 0 in the randomized datasets:

Looking at the plot above, it’s clear the the observed difference is not what we’ve expect if there is no relationship between transmission type and weight, but we can go ahead and calculate a p-value:

This way of calculating p-values is based on this paper and ensures p-values can never by 0, which wouldn’t make any sense.

Aside: To create randomized datasets that you can re-generate at some point in the future, use set.seed(some_number) before randomizing your data. This sets the seed of the random number generator in R, ensuring the same pseudo-random numbers are producing the next time you run your analysis.